I finally have the 1e core

Anyone who has been reading this blog for a long time knows that I like to fulfill my nostalgic childhood dreams by assembling complete collections of things that I wanted as a kid but never got around to acquiring. Early on, I wrote a great deal about retro game-consoles and 8- and 16-bit computers. But lately, I've also started an earnest initiative to collect physical, deadtree copies of RPG rulebooks.

I had already completed my collection of all the OD&D core rulebooks some time ago (OD&D broadly construed, that is—Chainmail, the white box, the four supplements, Swords & Spells, Holmes Basic, B/X, BECMI, the 1070 black box, the Rules Cyclopedia, Wrath of the Immortals, and the 1106 tan box). And now, as of today, I've finally assembled all of the 1st Edition core books (with two caveats)—

—namely, I'm not holding out and waiting around to find an early printing of Deities & Demigods. I like the unified aesthetic of the orange-spine editions better anyway. So I'm cool with having a vintage copy of Legends & Lore, and then just printing off a booklet containing the missing sixteen extra pages of Lovecraft and Moorcock matter myself. And I'm also including Trent Smith's Heroic Legendarium in this collection, because it's really well done and basically the Unearthed Arcana II that never happened. It deserves to sit alongside the rest of the hardcovers.

When I was a kid, I only had two 1st Edition rulebooks—the PHB and OA—because I really liked monks and kung fu and wanted to make sure that both were in my AD&D 2nd Edition campaigns in plentiful supply. But now I finally get to delve into the system in its entirety, to see the big picture as a whole gestalt for the first time, and I'm really looking forward to it. Hopefully I'll find the time to blog about what I learn.

In the meanwhile, I can now turn my attention to finishing my collection of 2nd Edition core books, which is actually already mostly complete too. I have the Player's Handbook, Dungeon Master's Guide, Monstrous Manual, Legends & Lore, Tome of Magic, Book of Artifacts, and the four Option hardcovers (Skills & Powers, Combat & Tactics, Spells & Magic, and High-Level Campaigns)—which leaves only the four Monstrous Compendium Annual volumes, which I have not yet sought out and which are sort of borderline between core books and supplements. The Annuals are sort of semi-core, along with all of the leatherette reference splats (the red-brown player reference guides, the blue DM reference guides, and the green historical reference guides) and the Spell Compendia and Encyclopedia Magica volumes.

My goal, ultimately, is to collect these splats and also the GAZ, AC, and PC series of D&D supplements. At that point, I will consider my collection of OD&D and AD&D manuals to be essentially complete. ■ 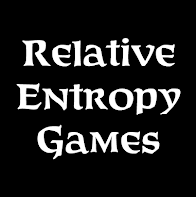 SRDs Published Under OGL 1.0a