I've been in a bit of a mood lately. A nostalgic mood. I've been recalling the games I enjoyed in my youth, looking back on fond memories of chess and backgammon and mahjongg. This nostalgia bug bit me a bit over a month ago: I decided that I missed having one of those tournament-style chess sets with the roll-up board and the large, weighted pieces—like I used to have in middle school. (My old one was sadly destroyed long ago.) And so I bought a new one: 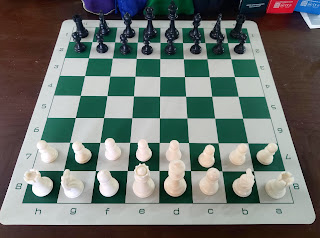 And then things started to spiral. 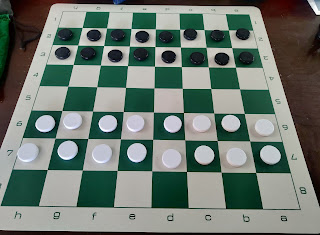 The thing about Turkish checkers is that you need sixteen pieces for each side—half again as many as a typical game of checkers, and one piece more on each side than even a backgammon set will provide. Since checkers of this size are mostly made for backgammon players, they naturally come in sets of thirty (fifteen white and fifteen black), so I needed two sets if I wanted to enjoy Turkish checkers (or any of its variant games that require more pieces, such as Dameo and Croda).

Well, once I had the checkers, naturally, I needed a backgammon set too. The problem was, for the life of me, I just could not find a rollable backgammon mat (like the chess/checkerboard pictured above) large enough to accommodate these large tournament-size checkers which were ostensibly for backgammon games. Oh, sure—I could find expensive suitcase-style backgammon boards aplenty, naturally. But nothing rollable and portable in the same way as that chess mat.

So put in a pin in that for a moment.

In the meanwhile, it occurred to me that as much as I enjoy Western chess, I enjoy xiangqi (Chinese chess) quite a bit more. I already had a couple of nice xiangqi sets, but was there a rollable xiangqi mat that I could use with my new set of big tournament-size Western chessmen? There sure was: 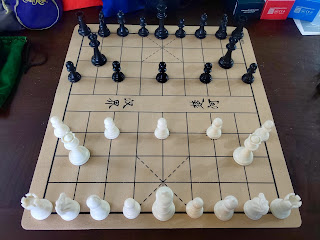 (Pro-tip for anyone who wants to play Chinese xiangqi or Korean janggi with Staunton-style chessmen: you totally can, as long as your set has extra queens. Just use queens for cannons; and use pawns for both soldiers and mandarins. Since the soldiers can only ever move forward or sideways, and the mandarins can never leave the king's castle, it's impossible to ever confuse them.)

At this point, a few new thoughts occurred to me. First off, if I now had both Chinese chess and Korean chess in this still surprisingly portable kit, could I not quite easily add shogi (Japanese chess) and also a set for playing go/weiqi/baduk (and its cousin games, like gomuku, renshu, and pente)? Well, go was easy enough: 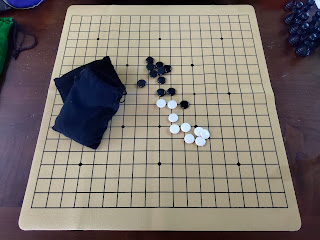 Mats like these (with the full 19 × 19 grid on one side and a smaller 13 × 13 grid for shorter games on the back) are a dime a dozen online. But a roll-up shogi board was nowhere to be found; so I decided to take matters into my own hands. I got my hands on some halfway decent koma with Western markings on them (you can't use Western chessmen for shogi because pieces can change sides in Japanese chess!), and then I simply drew the required 9 × 9 square shogi board on the back of my tournament chessboard: 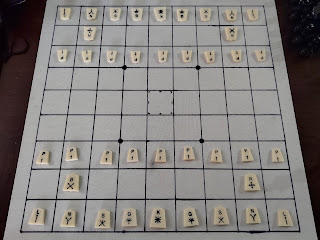 Of course, now that I had a 9 × 9 grid featured in my ever-expanding game-kit, it made sense to pick up some extra black pawns so that I could also use it for playing king's table (tablut, also known somewhat erroneously as Viking chess or Celtic chess): 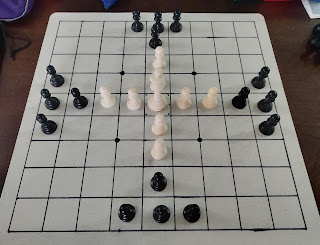 And, once I had taken the step of drawing on one of my new chess mats, well, it seemed a little thing to draw on the other one that had a blank back—hence my addition to the back of my xiangqi mat of a board for playing nine- or twelve-men's-morris: 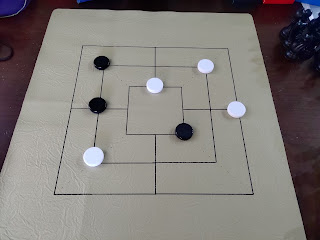 Not the deepest game ever, by any means, but I also have fond memories of playing this one as a kid.

But at this point, I was beginning to despair of finding a decent backgammon board—until I remembered that amongst my several old Chessex gaming mats, I had one that had long ago been ruined by the hasty and accidental application of dry-erase marker to one region of it. I had thankfully and prudently kept the remains of this ruined mat, just in case I might ever need some gridded vinyl—and now, I found myself in need of some.

The mat in question used a 1½" grid, which proved ideal for drawing backgammon points of just the right size to accommodate my heretofore troublesome 1¼" checkers: 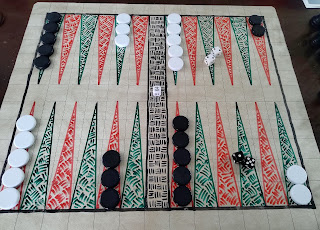 It works like a charm! (And it looks quite charming too, if I do say so myself—a backgammon board with character.) But with this side all done up, what to do with the other side of the mat, gridded in 1½" hexes? I considered Chinese checkers, but ultimately, I decided on hexagonal chess instead: 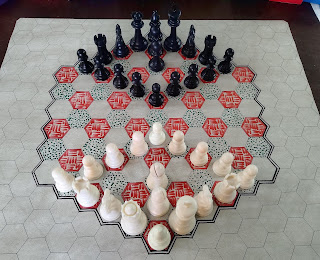 Hex chess merely requires that each side have an extra pawn and an extra bishop: no big deal.
So with all of this now accomplished and collected, was my portable tournament-size classic gaming kit now complete? Well, almost. I figured, I might as well add some other favorites to the pile. I already had some mahjongg playing cards—they're certainly not as nice to play with as actual mahjongg tiles, but they're handy and convenient and easy to transport—and to these I added some domino playing cards and some poker dice, as well as a few fresh packs of standard playing cards: 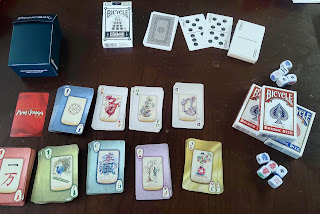 But the crown-jewel of this game set—the pièce de résistance—is another set of playing cards, one that I had printed just for the occasion. Naturally, it's a tarot deck—I do love playing tarot games—but this one is special, because it uses bridge-size cards (basically impossible to find anywhere; the vast majority of gaming tarots are either full-sized French jeu de tarot decks, while what few American gaming tarots you can find are always personal vanity projects that wind up using poker-size cards for some baffling reason that I cannot fathom . . . why, why, why would anyone do this for a game where  you have to deal out most of a 78-card pack to all the players!? . . . this is why bridge-size cards exist!!!). The card backs and the front designs for the suit cards (pips and courts) and jokers are all taken from American Civil War-era style poker deck designs, except for the cavaliers, which, along with the trump cards, take their design from the Tarot de Marseilles—an art-style astonishingly well-suited (no pun intended) to a deck like this, as the tarot trumps and the poker face cards actually wind up looking pretty nice together! 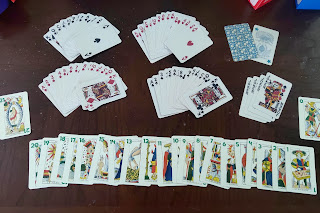 All told, I'm extremely happy with how these cards turned out—the quality is top-notch. The cardstock and the finish are as nice as Bikes or even Bees, and the print quality is excellent, nothing fuzzy or pixelated anywhere.
So… that's my new classic game kit, all fully assembled and ready to take anywhere that anyone might want to play a game. Here it is all bagged up and ready to go: 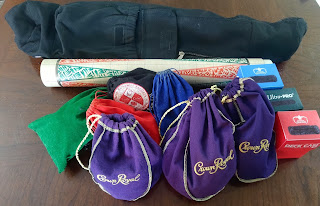 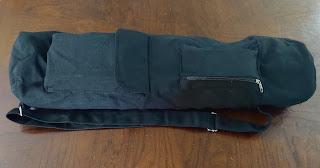 Have chess set, will travel. For some reason—likely the sheer multiplicity of games involved—I find this even more satisfying than a well-assembled D&D kit. And coming from a grognard like me, that's really saying something, boy-howdy. ■
Posted by John Higgins at 4:45 PM