HeroQuest, Ghostbusters, and a D&D Synthesis 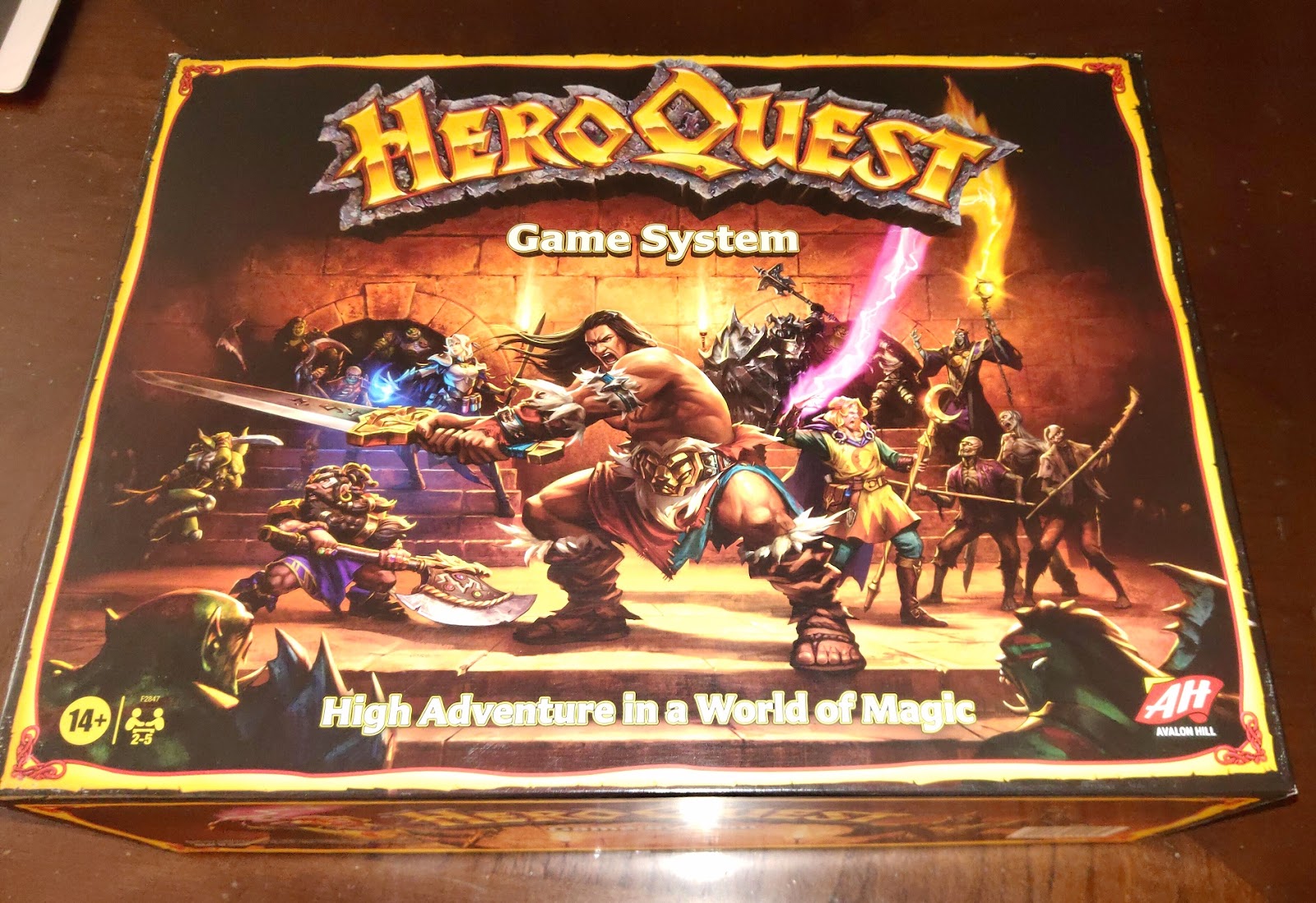 So I finally pulled the trigger on a HeroQuest set, and I'm super excited to give it a try later this week! You see, I've never actually played HeroQuest, even though I've been aware of it for a long time indeed. I knew of the game, but I never had a set as a kid, and neither did any of my friends, so it's always been admiration from afar. (Or over a dial-up connection, as the case may be. Back in the 90s, I used to frequent Ye Olde Inn and print off their fan-made HQ tiles on my dad's crummy old inkjet printer for use with black box D&D and 2e AD&D games.)
One of the reasons I'm most excited? HQ is almost certainly one of the key inspirations behind the Sega Genesis Shining Force titles, and I want to see it in action on the tabletop before I dive back into designing my own skirmish game, Shining Armour. I suspect that I'll find plenty of inspiration in its mechanics, and it may even help me to solve some game-design dilemmas that I've had trouble working through.
* * *
Another couple of recent acquisitions that have me excited: I lately obtained a print copy of Spooktacular, a delightful retro-clone of the WEG Ghostbusters RPG, and in order to use it properly, I decided that I needed some official Spooktacular "spooky dice", which serve as the game's d6 System "wild dice" — as well as some suitably ectoplasmic-looking regular d6s to roll alongside them (Chessex "neon green" proved an excellent candidate for that).
Then, after also getting my hands on a copy of the Ghostbusters board game, I discovered (much to my surprise and delight) that the dice contained therein were replicas of the WEG wild dice for use with Ghostbusters. So now I'm spoiled for choice when it comes to dice aesthetics if I should ever find the time to run a Ghostbusters TTRPG. 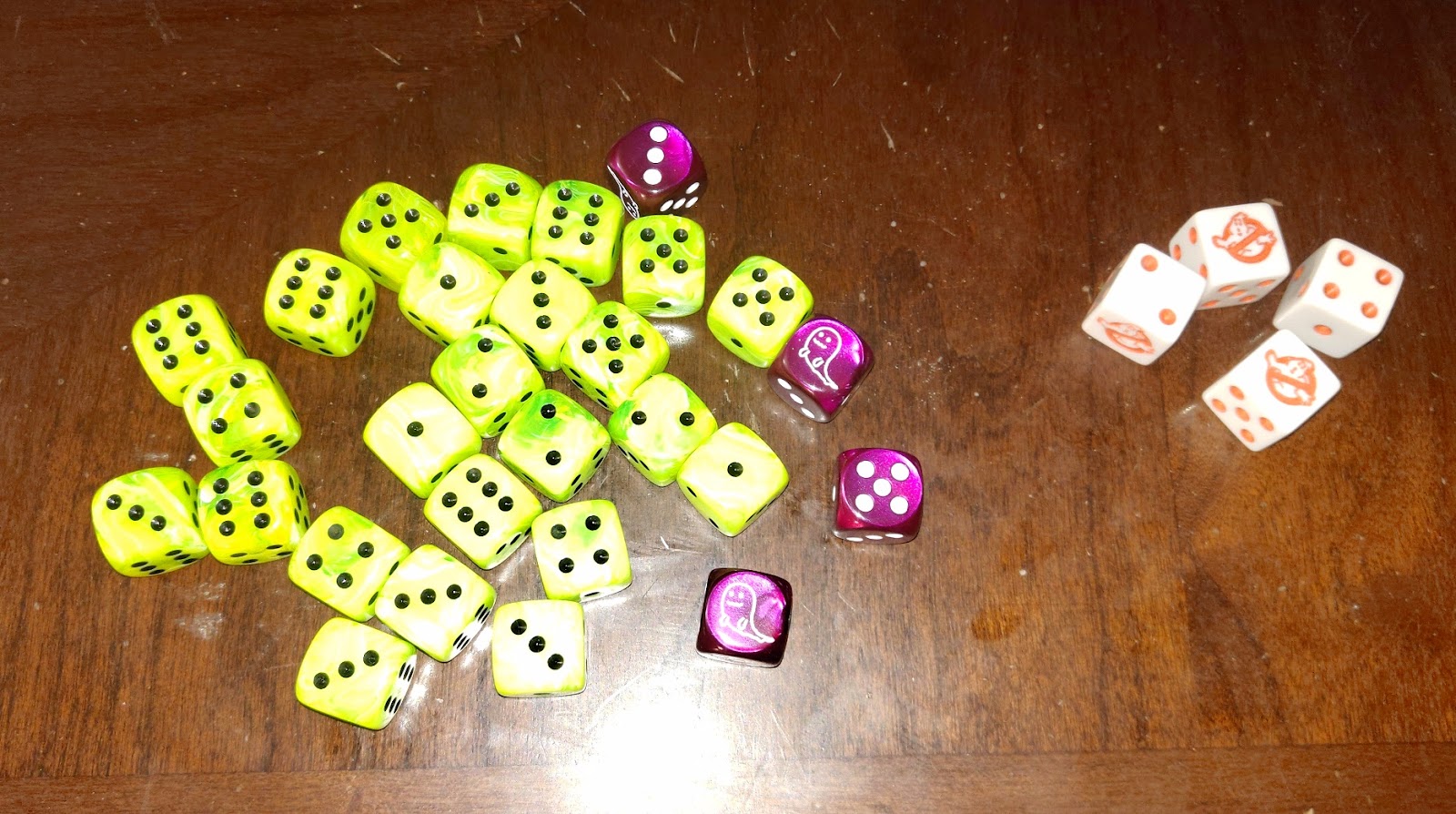 * * *
Next, a major left-turn in the way I've approached D&D for the past, uh, very many of years. I have practically always treated OD&D and AD&D as two different games. This has been a longstanding habit, ever since I first started playing RPGs. But, after my last tabletop campaign came to an end, I experienced something of a personal crisis with respect to that philosophy. I missed parts of AD&D, but not enough to want to switch over to that system for a campaign of any respectable length. I certainly didn't want to abandon OD&D for its more complex counterpart. So the only option available to me, I came to realize, was to finally get over that strict delineation and simply do what gamers have always done, take the pieces of AD&D that I like, and kitbash them into my OD&D house rules.
To that end, I've quit maintaining two separate house rules documents for OD&D and AD&D. Now there's just a single D&D document on this blog's sidebar, and it represents a much more radical departure from the core of both OD&D and AD&D in a couple of important ways:
• The class system is completely restructured. It retains elements of both BECMI and AD&D. There are four basic classes (fighter, mage, cleric, thief); five "prestige" classes (paladin, avenger, bard, druid, assassin); five optional classes (monk, psionicist, artificer, ranger, minstrel); and five demihuman classes (elf, dwarf, hobbit, gnome, orc).
• The level scaling is drastically reined in compared to either game. Human characters can reach a maximum of 18th level; demihumans, 12th or 13th level. In either case, experience point requirements to reach levels above name level are no longer strictly linear, so it still takes millions of XP to max out any class — the fastest of which is the hobbit, which reaches 12th level at exactly 2,000,000 XP, whereas the slowest class to reach top level is the ranger, needing 6,080,000 XP to reach 18th level. (Rangers are still woodsmen and monster-hunters in this rendition, but their primary function is to serve as "gish"-types, combination fighter/mages which are something of a human counterpoint to elves.) For comparison, thieves max out at 2.8 million XP; clerics at 3.2 million; fighters at 4 million; mages at 4.8 million; and monks at 5.6 million.
• The decision of which classes to keep or add has been based on a desire to "cover all the bases," so to speak, with respect to including all of the traditional D&D and AD&D archetypes. To that end, practically every major character type from every edition now has at least some mechanical representation that I can point to for my campaigns. That's… very different from the way I've treated D&D for the past decade and a half, and it's honestly kind of a relief to have true "sub-classes" back in play. I've missed them.
* * *
Finally, I just want to speak briefly on a cool critical hit rule I heard about recently.
I haven't used critical hits at all in the last several campaigns I've run (going back to my Barrowmaze game from some four years back). Gary Gygax was against critical hits, believing that they made D&D combat too swingy and unpredictable, lessening the ability of players to make sound, informed judgements concerning when to retreat vs. when to press on. Having played without crits, I find that I agree — Gary was right. (Loath as I am to admit it, Gary was often right.)
Still, that expectant look in players' eyes when they roll a natural 20 (or a natural 1, as the case may be — at my table, one rolls under a target number on the d20 to score a hit or make a saving throw), followed by the subtle note of disappointment and disapproval in their voice when they learn that I don't have critical hits or critical fumbles in my campaign… it's galling.
I can do one of two things here. I can stick to my guns; or I can pull a bit of mathematical sleight-of-hand and fool players into thinking that an aced attack roll is something spectacular. And the way to do it is easy enough: just let damage dice explode on a natural ace. When the d20 turns up a 1 and the hit is automatic, let the player roll damage, and keep re-rolling and adding if they roll maximum damage. The possibility of considerably high damage exists… but it's remote. In fact, the actual result of exploding damage dice for any die of d4 or larger is an expected less than +1 point of extra damage.
And if you use corrected exploding dice — where each time the die explodes, you subtract 1 from the total before re-rolling and adding, so that for a die of size dN, multiples of N are still possible results — then the expected extra damage for any die, even a d2 or a d3, is just +½ hp of extra damage exactly. It's practically the same thing as flipping a coin and adding either +0 or +1 to the damage roll on a critical hit, but the perception of it — because of the vanishingly remote possibility of racking up die after exploding die — will be that the impact is even greater than maximum damage or double damage on a crit. When the truth is that there's almost no impact on the game system at all.
I've detailed this critical hit rule in my house-rules document as well, though it's clearly marked therein as "optional." I expect that the next time I run D&D, I'll be giving it a try, and I also expect that whoever I'm playing with will absolutely love the idea. Even in spite of the fact — or maybe because of the fact — that I'll be sure to take a shortcut with monsters and just have the PCs' opponents inflict +1 extra point of damage 50% of the time when they crit. Same difference. ∎
Posted by John Higgins at 9:04 PM 5 comments: