I don't want to neglect my blog, but…

…all that pesky "adulting" keeps getting in the way of doing what I'd prefer to be doing all the time, namely writing and game-design. I have a heap of subjects that I want to write about, and oh so little time to squeeze in any posts.

Apart from game-related subjects, the topic foremost on my mind is the recent film, Ghostbusters: Afterlife. When I have a spare moment, I need to devote an entire post to that movie, because… well, as someone who was born in 1984 (the same year that the original Ghostbusters was released), I grew up with The Real Ghostbusters and Ghostbusters II. I was one of those child-of-the-80s "fanboys" for whom Ghostbusters was utterly formative, precisely the sort of fan for whom (so everybody keeps saying) Afterlife was made… and I just need to talk about that soon.

But right now? Right now, I'm taking a surreptitious break at work to dash off a quick "hey, I've just remembered that I have a blog, and I need to promise myself that I'll keep writing for it!" post. And it just so happens that I have the perfect, fluffy little subject to address quickly.

I love my new dice.

I finally got my set of "OSR Full Monte" dice in the mail from Threshold Diceworks, and they are fantastic. This, in spite of the fact that I came into the hobby in the 90s, and therefore all of my personal "dice nostalgia" is directed at Chessex and Koplow and Gamescience dice from that time. I never had a Mentzer or Moldvay Basic Set growing up, never mind the Holmes Basic Set that inspired these dice. I never had dice that looked anything like these. But they're just so… beautiful. Simple. Functional. Iconic. 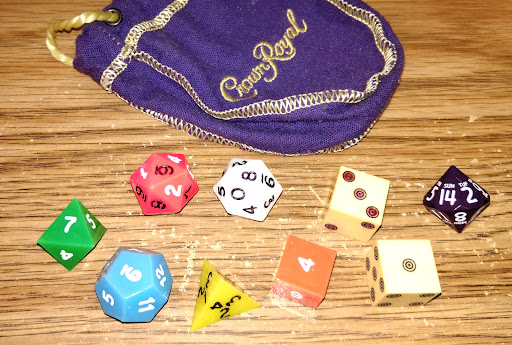 When I was growing up, the dice that came in every TSR set were Chessex make—the orange d20, yellow d12, a pair of black and white d10s, a blue d8, a red d6, and a green d4. WotC would later put a similar set (a Koplow design) in their boxes, switching the dice from black to white ink and slightly redoing the color scheme, to orange d20, yellow d12, purple d%, green d10, blue d8, red d6, and black d4. But the ancestor of those rainbow-colored "official" D&D dice sets? That's the Holmes dice, of which the above are a replica. White and pink d20s, sky-blue d12, green d8, orange-red d6, and yellow d4.

And they're perfect (not least because they predate the "Deckaider" d10 and therefore keep the whole set to platonic solids)! Just for the sake of rounding out the set, of course, I have added one non-platonic shape to the mix—a purple d14, because it's handy to have one of those for when you want to generate a random day of the week or number 1–7 without having to re-roll your d8—as well as a couple of extra d6s. More d6s are a must when refereeing a game, because in a typical session, you're constantly rolling 2d6—morale checks, reaction rolls, initiative, surprise—and in those latter two cases, the d6s need to be differentiated somehow, to compare the rolls. In my case, I took a couple of vintage Bakelite casino-style dice with the "birdseye" or "target" pips, and colored one set of pips in with red ink. (The red-pipped die always represents the monsters when I roll for initiative or check for surprise.)

And, of course, the set now has 3d6 in total for the sake of generating character ability scores, even though that's not something I find myself doing terribly frequently at the table when I'm actually running games.

One thing I've found that I really like, though, is having a pair of old-fashioned "0–9" d20s to serve simultaneously as d20s, d10s, and percentile dice. It keeps the set sleek and trim; the dice are versatile; and when you use them for percentiles, the pair of d20s just has a pleasing heft in the hand. (Plus, the d20 inked in two colors just plain looks a lot cooler in person than I ever thought it would.)

I've only had the chance to actually use these dice twice since their arrival, but I think I'm also going to need to write an entire post dedicated to their more recent application. You see, the first time I used them was during a session of the regular weekend campaign I'm running now (yet another outing for my longtime favorite and mainstay, the Shade Isle hex-crawl and its Shade Abbey mega-dungeon). The second was for a quick one-shot that I ran for a couple of friends, which also served to playtest a set of rules for Basic D&D that completely lack ability scores, character classes, or any process of character creation—and it was both an awesome game and a resounding success of a test. So, more on that very soon.

Right now, my gaming projects are still taking priority over my writing projects, with my revised skirmish game (Shining Armour) still sitting at the top of the docket, followed by my mega-dungeons (The Fiendish Temple and Shade Abbey). But it's also occurring to me lately that my recent enthusiasm for adapting the OD&D rules to non-medieval settings should perhaps be driving me to dash off a few hacks for running games set in the nostalgic properties of my youth that I've always wanted to have RPGs for—stuff like Super Mario Bros. and, indeed, The Real Ghosbusters—which certainly already have plenty of tabletop adaptations already, but not D&D-compatible adaptations. I personally happen to believe (contra the Forge and its storygaming acolytes) that System Doesn't Matter All That Much™, and I'm starting to think here that maybe the best way to prove my thesis would be to write a serviceable Ghostbusters RPG that didn't go about the matter by cloning any of the much-beloved "Frightfully Cheerful," proto-d6 rules from 1986. But that'll have to wait for a time when I have… uh, time. ∎