A couple of months ago, I wrote about revising the cleric's spell progression to make the table used in Mentzer Expert and the Rules Cyclopedia line up a bit more with the table from Cook Expert and Men & Magic. I like the idea of clerics gaining early access to 4th and 5th level spells, because it's at the middle experience levels that clerics start to feel a bit lackluster compared to other classes. The problem is, in that earlier post, the solution that I hit upon involved something very AD&D-like: giving clerics at certain levels bonus spell-slots based on Wisdom.

But I don't want Wisdom to have that much of an effect on clerical spellcasting in Basic D&D. After all, Intelligence doesn't have much impact on arcane casting (at least, it doesn't post-Greyhawk and post-Holmes), and I think this was a good change between Holmes Basic and Moldvay Basic, because it makes low-Intelligence mages viable (if not necessarily desirable). It frees players up to choose their class without having to bow too much to the tyranny of the randomly-rolled ability scores. This is exactly opposite to the change that Moldvay's new ability score modifier table wrought upon fighters: after 1981, Strength penalties in combat ensured that low-Strength fighters were always a sub-optimal play in Basic D&D.

But, as I discussed in my last post, I now intend to curtail ability sore modifiers in order to solve that problem. And to fix clerics while staying true to this philosophy, the solution can't depend on Wisdom scores. Hence, another revision is needed, and here it is. 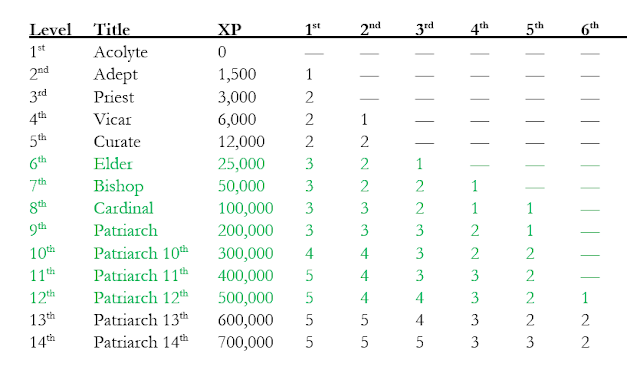 There's much to be said for the simple approach, and this is it: contra the first time I discussed this topic, I've decided to go ahead and construct a gimmick-free progression that stays closer to the Cook/Marsh numbers (though it still avoids the weird "both 3rd and 4th level spells at cleric level six" thing) while still flowing neatly into the high-level progression found in the Companion Set and the Rules Cyclopedia. The cost is that the revised progression is entirely detached from both the Cook and Mentzer progressions, matching neither table from levels six through twelve, and instead hewing a "middle road" between the two in terms of total numbers of spells per day. Which is, perhaps, not just the simplest and most straightforward solution, but also the downright obvious one. ∎
Posted by John Higgins at 2:56 PM