Nnfff. The Final Fantasy Pixel Remaster is SO pretty. It's like a sucker-punch in the nostalgia dick.

A few weeks ago, I randomly felt the nostalgia bug and started playing through Final Fantasy and Final Fantasy II again. I mostly wanted to compare the various remake versions that I was familiar with: the PSX Origins release, the GBA Dawn of Souls version, and the (until now definitive) PSP releases which I had only lately acquired. It was clear that playing through these, the PSX versions had stayed truest to the NES originals while also providing nice graphical and musical updates; the other, more recent releases had adulterated the original games with soulless bonus content and a drastic reduction in difficulty. That said, the PSP versions easily gave the PSX versions a run for their money in the graphics department.

But now, Square Enix has released the first three Final Fantasy games on Steam and mobile phones as the inaugural entry their "Pixel Remaster" series (with the next three FF games due to come out in a month; no word on such a re-release for Chrono Trigger, alas). This is the first time that the western world has seen a proper release of Final Fantasy III in all its 2D-glory, and I frankly can't wait to play through it again. The 3D remake of FF3 was a disappointment to many, myself included, on account of its altered battle mechanics. But now I get to experience it again, only with all of the usual quality-of-life improvements we've come to expect from modern JRPGs (like a run button and auto-battles)!

As for the Pixel Remasters themselves, they are, in my opinion, gorgeous. The mix of old-school pixel effects (such as, for example, the way enemies disintegrate pixel-by-pixel when defeated, just like in the NES original) and modern music and graphics is phenomenal, and it blows even the PSP versions out of the water. 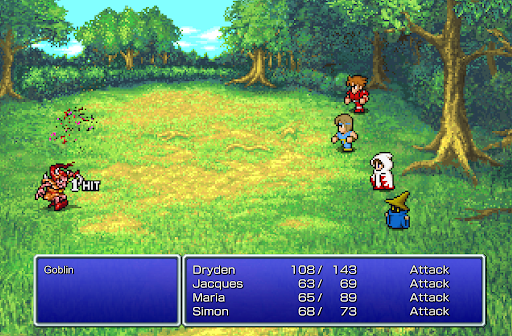 I think I'm going to have to play through FF1 and FF2 all over again before I even touch FF3!