So here's a nifty thing! I've noticed in recent weeks that it's kind of annoying to calculate XP adjustments (you know, those +5% and +10% bonuses for having a high prime requisite ability score) at the end of every adventure. Not such a bother that I'd want to do away with the adjustments, but mildly annoying nevertheless. So I decided to tabulate separate XP charts for all possible XP adjustments! All it took was a little spreadsheet magic, and voila:

I've created tables for every class that I allow in Dungeons & Dragons, Advanced Dungeons & Dragons, and Engines & Empires. As I expand my campaigns into other genres, I'll doubtless add pages to the document (since I know I'll be playing Raiders! of the Lost Artifacts, Freebooters, and White•Star eventually too)!

Since the D&D and AD&D pages do incorporate my house rules, I don't know how directly useful the document will be to anyone else, but at least it serves as a simple model for how to create one's own XP calculating tool. Just a bit of Excel formula, a bit of formatting, and some copy–paste action, that's all there is to it.

The wall of shame as of the 4th, 5th, and 6th sessions of the campaign

As of two weeks ago, the total number of campaign deaths looked like this: 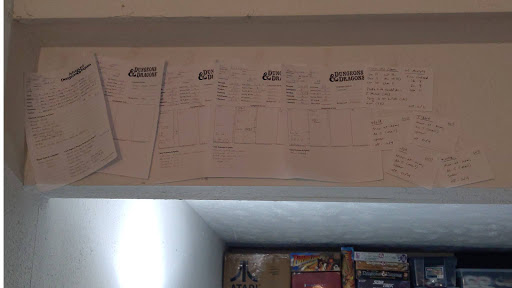 Here's an excerpt of a play-report that I wrote up on the fourth session of the campaign, the one that added the last full character sheet and all those little index cards on the right with NPC stats on them:

The party went into the dungeon ten strong on this occasion: three PCs (Iowynn the dwarf, Ragnyr the dwarf, Leonard the mage), one NPC (Clara the cleric), and six men-at-arms (Jęk, Wäld, Lily, Kurtz, Renée, and Tibbit). Having previously discovered three different entrances to the dungeon, they opted for the south entrance (a secret door behind four towering statues of elvish warriors) because it puts them nearest to kobold territory; on previous delves, they had befriended the kobolds and now counted them as trusted allies. That gave them safe passage through a good number of rooms before they struck out into unexplored territory. They passed through a room occupied by some confused orcs who didn't speak Common (a bit of gesturing allowed the two parties to cautiously avoid each other without a fight breaking out); poked around in some empty halls with broken furniture and statuary; made a second failed foray into a large chamber choked thick with rubble and glistening clear slime, with blind cave-locusts jumping around; but decided on caution and retreated from the big bugs rather than engage them.

Going another way, they bypassed several side-passages and doors, came to a room covered with matted webs, and fought four giant spiders—Wäld was a casualty, but only one dead soldier wasn't going to get the PCs turning around. And they found a cache of 480 electrum coins in a coffer among the webs, just a small treasure but not a terrible take considering the monsters guarding it. In the next chamber, a big grand hall (deserted, with lots of worn statues of armed elves and some furniture crowded around a big stone hearth), the party found some side-passages, but also a secret shaft down to the next level inside the hearth.

And Ragnyr the dwarf (run by my group's consistently most reckless player—he's already lost a character this campaign, press F for Jakob the thief) decides to head down alone. He starts poking around at the bottom, finds a secret door that opens onto a creepy chamber occupied by some mutant sahuagin. And does he close the door? Run? Try to climb back up the rope? Nope. He calls for help from the party and charges, one 1st level dwarf vs. four 2-HD monsters with multiple attacks. So, yeah, in the ensuing mêlée, with the party climbing down the rope one at a freaking time, we have the PCs literally marching into a meat-grinding bottle-neck of their own making, never even considering retreat. Because Ragnyr, the first to fall, was also carrying the bloody treasure.

During the fight, the party lost Ragnyr, Clara, Jek, Kurtz, and Tibbit. Two of the sahuagin were slain, while the other two fled with 1 and 2 hp remaining. Only Iowynn, Renée, Lily, and Leonard made it out of the dungeon—and Leonard never even climbed down the shaft or tried to use his one spell (charm person). Freaking disaster, and it's all because the players made one tactical blunder after another. They could've made out much better if they'd proceeded with due caution and common sense, or used better tactics, or simply retreated early on. But they didn't, and they paid for it in blood.

That was the bloodiest disaster of the campaign so far.

One week ago, a rather different party went into the dungeon. This delve consisted of four player characters (Iowynn the dwarf, Rye the mage, Francis the cleric, and Orgak the orc) and three NPCs (Thaddeus the thief, Sally the 0-level soldier, and Tommy the torchbearer). This fifth session of the campaign went much better for the group. The players were cautious—they never once got drawn into a battle with monsters. They searched a lot of deserted rooms, discovered a huge cache of silver coins (some 19,000 silver pieces and more), and best (or maybe worst) of all they discovered hints that there might be an actual fucking honest-to-goodness dragon lurking around somewhere on dungeon level one. So they took their silver and skedaddled back to town, gave all of the treasure to Iowynn (forgoing anything like an even split), and leveled their dwarf (the one character to have survived every single delve of the campaign so far) straightaway up to level 2.

This week—just now, as the sixth session of the campaign ended less than an hour ago—was only a semi-disaster. No new sheets added to the wall of shame hanging above my DM chair, but that's only because the group was now rich enough to afford a few raises thanks to that treasure haul from last time. The same group went back into the dungeon, plus another player character (Leonard the mage). After a very short while exploring, they opened up one room with two salient features: stairs down to dungeon level two, and a crapload of slimy diseased zombies. The party attacked. Francis the cleric failed to turn. Iowynn, Orgak, and Sally formed a line of well-armored troops.

And then one of the zombies got in a lucky shot—bypassing Orgak's Armor Class of freaking −2—and killed Orgak with a single blow, 1d8 damage that of course turned up an 8.

After that, the battle was chaos, but the party rallied, and they slew the rest of the zombies with only Sally as a casualty near the very end of the fight. But now that the party had some cash in the bank, they were able to have both Orgak and Sally raised from the dead in town, so even though it practically emptied their coffers, Orgak's player wasn't too broken up about it. Since Orgak will have to be bedridden for at least two weeks following his resurrection, he's out for the next few game sessions—and Orgak's player has actually managed to roll up a monk to replace him. (When I run red box D&D, I require that monk PCs have initial scores of at least Str 13 / Dex 13 / Con 9 / Wis 13, so that's no mean feat!)

What little treasure was found by the party during this brief delve (about 600 gp) was given over to Francis the cleric, who's the next closest to leveling up. He now needs about 150 more XP to make 2nd level and finally acquire a spell slot. So that'll probably happen next session, assuming the players don't utterly bungle things again.

God damn, but it's nice to be playing D&D regularly again. I didn't really know how much I'd missed it until I had it back! ∎

Posted by John Higgins at 9:52 PM No comments: