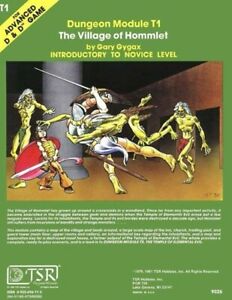 Last night, I just finished up a short, three-session play-through of the AD&D 1st Edition module T1, The Village of Hommlet. It was my first return to AD&D in a very long time indeed, and my first time ever running 1st Edition instead of 2nd Edition. I found the game to be great fun, but I was a little put off by how quickly characters can gain levels in 1st Edition, thanks primarily to the XPs awarded for the acquisition of magical items. It puts the pace of even the WotC editions to shame! Among the magical items the party can find in module T1 are a potion of undead control (worth 1,500 XP) and Lareth the Beautiful's staff of striking with its 20 initial charges (worth 6,000 XP when fully charged, reduced commensurately for however many charges are expended, but still quite the capture for any character that can use it)!

The party of player characters began five strong, with my wife playing Lady Sera Tonin (1st level paladin), my boss playing Theophania Fleetfoot (1st level halfling thief), my brother playing Wilfedric (1st level gnome assassin), my neighbor playing Tealeaf Clay (1st/1st level half-elven cleric of Wee Jas/mage), and my neighbor's friend playing Jeff (1st level monk). Except for the unfortunate Jeff, whose player was only able to attend the first of the three sessions (and whose monk then got unceremoniously eaten by ghouls in the Moathouse Dungeon's crypt area), the other player characters made out like bandits with the final defeat of Lareth the evil cleric. At the end of this short game, Theophania and Wilfedric were 3rd level, Sera Tonin was 2nd level, and Tealeaf Clay was 2nd/2nd—with all of them 1 XP shy of the next level up, purely because they couldn't gain more than one level per session!

Now I can see why Gary Ggyax was always admonishing his fellow referees to be stingy with treasure, clever at hiding it, and ruthless when it comes to not pulling punches! If you're playing 1st Edition, you practically have to be adversarial to a degree, or else the player characters will have it far too easy! (It also explains level-draining undead…)

What really astonished me, though, was how similarly 1st Edition plays to Basic D&D on a fundamental level, while also clearly being different enough that it's noticeably and unarguably a separate game. Whatever I might have believed before about the whole "D&D and AD&D are legally two different games, so that TSR could stiff Dave Arneson on royalties" shtick, I'm now firmly in the camp that holds to the notion that Gary Gygax wasn't by any means lying when he said that AD&D was a new game. It was; it is. It's different.

It's different enough that AD&D won't displace D&D as my go-to medieval fantasy RPG anytime soon. I did enjoy playing 1st Edition, but I do still prefer the simplicity of D&D over the wild nostalgia-trip that is AD&D. (That said, if and when I do come back to AD&D again in the future, I'll largely stick to 1st Edition, and with only a very few tidbits borrowed from Unearthed Arcana or 2nd Edition. By-the-book 1E is the way to go, if only for the magical classes' comparatively short and manageable spell lists!)

One other thing that did surprise me, at least a little bit: I had always supposed that 1st and 2nd Editions were more different than they actually are. Yes, there are clear differences, but some of the basics—the XP tables, saving throw tables, even most of the attack tables—carried over with startlingly little change. I had never really done a deep dive into the weeds of the rules minutiae to compare them before, but this time I did, and I'm glad for it. I feel better about borrowing liberally from both 1E and 2E when it comes to playing AD&D; nothing will break, and very little will conflict.

I'm going to end this post here, but my next three posts (I've decided to make it three, just so that each is more easily digested) are going to outline my house rules for AD&D 1st Edition—the way I'll play Advanced Dungeons & Dragons if I should ever decide to give a full Temple of Elemental Evil campaign a go. (And, in the far future, if I ever decide to do the same for the Return to the Temple, I'll produce a similarly detailed series on any necessary house rules for D&D 3rd edition—but that's a very low priority for me right at the moment.)