The final section of my series on AD&D 1st Ed. house rules considers the thief, the assassin, and the bard. 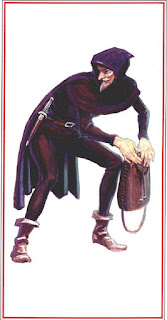 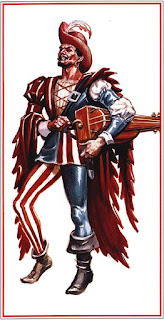 Thieves
No changes are made to the thief class itself except the list of allowed weapons: anything that the thief is permitted to wield in Unearthed Arcana or 2nd Edition is permitted. The most important addition is the short bow: thieves without bows is just unimaginable to me.
That said, 2nd edition made another change which is generally good for the game, as it gives human thieves a reason to exist: instead of nearly all demihumans being unlimited in the thief class, they are level-limited as in 2nd edition—dwarves, elves, and half-elves limited to 12th level, gnomes to 13th, and halflings to 15th. (Half-orcs remain limited to 8th level as in 1st edition.)
Assassins
Assassins have the following changes.
• Assassins roll hit dice as thieves do, with a maximum of ten six-sided hit dice at 10th level (and only +2 hit points at all higher levels). Human assassins have no maximum level: each level above 15th (grandfather of assassins) requires an additional 250,000 experience points. Assassins of 16th level and greater, having surpassed the hierarchy of the assassins' guild, are titled free agents. (Half-orc assassins are limited to 14th level, i.e. guildmaster of assassins, and may not become grandfather of assassins or a free agent.)
• The assassin has a "death attack" that works much as it does in 2nd Edition: provided the assassin has managed to study a human, demihuman, or humanoid target for three consecutive rounds at any point within the last 24 hours, the assassin may then attempt to assassinate that target by striking a single blow. The assassin must successfully backstab or otherwise surprise and hit the target; the target must then roll a saving throw vs. death (at a penalty of −1 per four full assassin levels attained, e.g. −1 for a 4th–7th level assassin, −2 for an 8th–11th level assassin, etc.) or be immediately reduced to −10 hit points. On a successful saving throw, full normal damage for the backstab is still inflicted.
• Assassins acquire the ability to read magical scrolls at 12th level, like normal, but they are only able to read illusionist scrolls, not magical scrolls in general (as thieves can). Further, assassins of 10th level and greater have a limited ability to cast illusionist spells, in much the same fashion that high-level rangers cast mage spells: 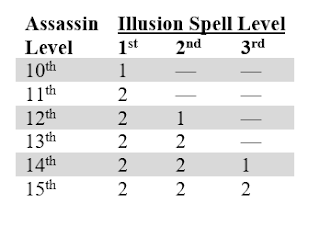 Bards
Like monks, bards are a bit of a garbage-fire and necessitate almost a total rewrite.

• The bard is a sub-class of thief, and a class just like any other. A player character bard begins at 1st level and does not need to be a thief or a fighter first. (In fact, since bards are a thief sub-class, the thief/bard multi- or dual-class is not possible.) A bard requires Strength 9, Dexterity 12, Intelligence 13, Wisdom 12, and Charisma 15. Dexterity and Charisma are considered the bard's prime requisites. Humans and half-elves may be bards, and half-elven bards may reach a maximum level of 16th in the bard class.

• Bards have all of the capabilities described in the 1st Edition Player's Handbook (additional languages, charm/fascinate, legend lore/item knowledge). They may become proficient in any weapon (as a fighter) and may wear armor up to chain (but cannot use a shield). Spellcasting in armor is permitted. Bards advance in all of the thieving skills as a thief of one-half their actual experience level, except for Read Languages and Read Scrolls (bards use their full bard level for these abilities, and moreover, a bard's understanding of magic is superior to that of a thief's, such that 10th level and greater bards are able to read any scroll, arcane or divine, and their chance of backfire is only 15% rather than 25%).

• Bards cast both druidic and illusionist spells. A bard's caster level for druidic spells is equal to one-half his actual level rounded up (i.e. a 1st level bard is equivalent to a 1st level druid, and the bard's druidic caster level improves by one on each odd-numbered level). A bard's caster level for illusionist spells is the same as his effective thieving level, i.e. one-half his actual level rounded down (equivalent to a 1st level illusionist at the 2nd bard level, equal to a 2nd level illusionist at the 4th bard level, etc.). Bards are never able to cast druid spells more powerful than 5th level or illusion spells above 4th level. 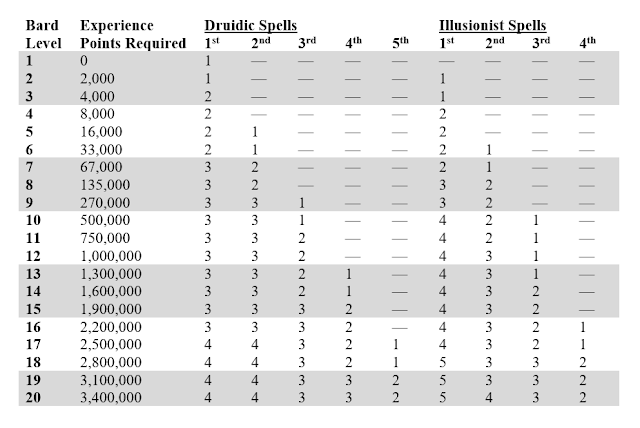 Bard levels above 20th require an additional 300,000 XP per level. Bards roll hit dice exactly as thieves and assassins do, with one six-sided hit die at each level 1st through 10th and then +2 extra hit points at each higher level.
Posted by John Higgins at 5:17 PM