Gaming today, and so very excited

After a couple of weeks of interruptions, in part due to my own burdensome schedule, and in part due to an over-crowded comic-book shop two weeks in a row (first from a card set release, then because of New Comic Book day), my D&D group's last regular meeting was April 20th. We squeezed in a short session, with only half the players able to make it, and at a different venue than we're used to, on May the 4th; but it really does feel like I haven't gamed in a month. Probably because I did at least a month's worth of schoolwork in the last week of the semester, and I've forgotten what fun is like.

Anyway, after many trials and tribulations on the high seas, and a second dead PC the last time we played, I expect that the party will at last reach the Isle of Dread today. And have I put the Hidden Shrine of Tamoachan somewhere on the isle? You bet your sweet bippy I have.

It'll also be the first time gaming with a pile of new equipment: custom .75" grid battle-mat, a new hand-made DM screen, some numbered checkers to serve as monster tokens, and a snap-together felt-and-leather dice-tray (it is so choice; if you have the means, I highly recommend picking one up). 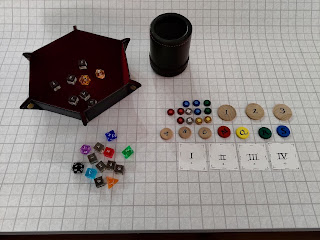 Yeah, baby. I'm psyched for this.

I've got Fighters and Rogues on my mind

It's the last weekend of my semester. I'm scrambling even more than usual to get all of my work in on time. I could maybe write about that.

My last D&D session involved fewer than half the usual number of players showing up, and indulging their maximum murderhobo instincts, with severe consequences. I'd also really like to write about that.

But for some reason, my thoughts keep getting drawn to the fighter and rogue classes, and the ways that I've implemented them in past and present campaigns.

In my Barrowmaze campaign, I've tried to go against my tinkering instincts and implement as few house rules as possible, to keep D&D as close to by-the-book D&D as I can. Where there are differing interpretations (say, between the Holmes, Moldvay, and Mentzer Basic Sets and the Rules Cyclopedia), I've tried to stick with either the most frequently occurring, or the latest and most up-to-date version of the rule that doesn't appear to be a grave mistake or inadvertent typo. So the Rules Cyclopedia mostly has precedent over the boxed sets, except where it seems pretty clear that the boxed set rules make more sense.