As of last week's game session, the party had been exploring Mystara's Sea of Dread in search of the storied Isle of Dread, when the player characters had stumbled upon a random island which happened to be home to the infamous White Plume Mountain. By the time the session had ended, the PCs had explored about two-thirds of the small dungeon and claimed Wave and Whelm for their own; our evening came to a close with the slaughter of all the monsters in the "inverted ziggurat" that guards Blackrazor.

So, being an obsessive with no real self-control, I went ahead and bit the bullet on my battle-mat redesign (say that five times quickly), and I have to say… oh, sweet hot mama, yes. 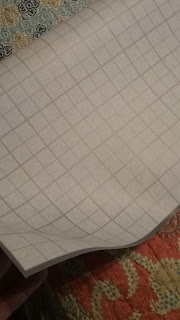 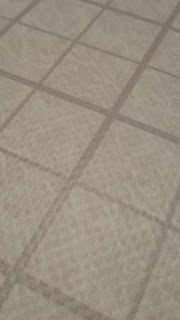 The grid looks perfect. The thicker vinyl feels far, far sturdier and nigh-indistinguishable from a commercially-produced battle-mat. The woven texture reminds me of the older battle-mats, before Chessex's design was ubiquitous, which is a total nostalgia-trip. The light-gray grid-lines against the white-marble background let any color of marker show up, and this particular vinyl even works with every kind of wet-erase marker I've thrown at it, including Crayolas. (Turns out, you can buy black Crayola Washables in bulk on Amazon; so I don't think I have to worry about finding decent markers in the future.)

After I was kind of disappointed by the mat that I received from bannersonthecheap.com (again, half of it my fault, because I didn't think the color-scheme through very carefully; half of it theirs because of the flimsy vinyl and heat-crimped edge-hemming), I went looking around for a company that would print on heavier vinyl (18 oz instead of 13 oz) and had an option to leave the edges clean-cut and un-crimped.  I went with printastic.com more or less at random, and I'm kind of blown away by the results.

So the bottom line is this: bannersonthecheap.com is, indeed, cheap. I would only recommend them for poster-maps that you're only going to pull out occasionally, such as a single specific dungeon, or perhaps as a backdrop for a specific wargame or scenario. In that case, the low price makes them a good go-to. Printastic.com (or anywhere else with similar options, although I can't vouch for other banner-printing websites) is a fantastic choice for a more permanent, repeat-use mat. If you need something custom, like colors or grid-sizes that you won't find from Chessex or Crystal Caste or any of the many, many newer sorts of battle-mats and -boards that you can find floating around on Amazon and Ebay, printing your own is definitely the way to go. And I could not be happier with how this one turned out.
Posted by John Higgins at 9:41 PM 1 comment:

My new battle-mat arrived from bannersonthecheap.com yesterday; I have to give it a solidly mixed review. Part of it is my fault; the grid I designed was composed of overlapping light gray and dark gray lines, set on top of a crinkly parchment background (one of the defaults in GIMP 2); and while the thin light gray lines just barely show up, the thick dark gray lines look almost black. This makes it very difficult to draw visible rooms with any color of marker, even black, over the grid that I wound up using. So, lesson #1 learned: next time I try this, use only light gray for the grid-lines, and don't use a background color that contrasts quite so much.

Testing markers on the vinyl, incidentally, has also met with some mixed results. "Expo Vis a Vis" overhead projector markers work fine (for the most part), whereas Crayola washable markers just bead up and don't form a line (in just exactly the same way that RoseArt and any cheap off-brand washable markers will when used on a Chessex mat; and of course those behave this way on this mat as well). On top of that, while black and green overhead markers wipe off just fine, blue stains and red stains badly. Lesson #2: only use black and green overhead projector markers when drawing directly onto a custom-printed vinyl battle-mat. (Not that I'll be doing this very much; clear plastic and dry erase markers make the whole affair that much more convenient!)

I'll try to keep this one quick. There's one full month left in my current semester, and I'm swamped. But once it's over, maybe I can do some proper blogging and game publishing. Think of this as an agenda for the near future.

My weekly D&D campaign has proceeded largely without interruption, and the players are at that level (6th mainly) where they get restless and want to wander off to exotic locales. Built into the Barrowmaze is an off-season when the dungeon floods for half the year, and the players used some of it to train up their characters, some of it to explore Stonehell dungeon (which I located about a hundred miles north of the main campaign area), and now they're going to spend the rest of it sailing the Sea of Dread and looking for the infamous Isle of Dread. I've also placed White Plume Mountain, Teki-Nura-Ria, and the Lost Caverns of Tsojcanth on various islands waiting to be found. At the end of the last session, the PCs only just found the entrance to White Plume Mountain (lightly re-skinned to fit a more tropical island theme), and we had a PC death to the "sphinx guardian" (which I replaced with a giant tiki-face with the same riddles and combat stats).