"I am waiting for you, Vizzini. You told me to go back to the beginning. So I have. This is where I am, and this is where I’ll stay. I will not be moved."
—Inigo Montoya

I. Introduction and Welcome

Welcome, one and all, to the first installment in my new blog series, the "Retro Rundown," wherein I'm going to read and analyze… pretty much everything old and D&D.

It struck me yesterday that if I'm going to stand up and declare myself a post-Old-School-Renaissance old-school gamer, it would be helpful to figure out what that means.

Like what Eddie Izzard said about Queen Elizabeth I and the Church of England:


The Protestant faith was different. That started, um, uh, well, probably around a similar time, but that was about Martin Luther, this German guy who pinned a note on a church door saying, “Hang on a minute!” But in German, so, “Ein Minuten, bitte! Ich habe einen kleinen Problemo avec dieser Religiones.” (He was from everywhere.) So yeah. So, and, uh, so the Protestant faith was sort of tacked, you know, on by Queen Elizabeth I a bit later. “Oh, principles! Thank God! We’ve got some principles.”

It's good to have some principles. Formulating them can be tricky, though. There's a lot of nonsense floating around, particularly within the OSR. It's no secret that I despise the Finch Primer and the whole notion of "rulings, not rules." It's just so incredibly, wrongheadedly ahistorical—or so my intuition tells me. Maybe I'll discover otherwise by actually going back to the texts.

Critics of the OSR liked to make fun of its proponents for partaking in "Biblical exegesis" of the 1974 D&D rules—of treating the texts like holy writ, and reading ideas into them that were never there. This is always a danger with any kind of textual analysis: the search for the impossible dream, that always-elusive white whale of "authorial intent." Thankfully, there exists a class of analyst which is trained to avoid the common pitfalls, and doubly thankfully, I happen to belong to this élite cohort: English majors!

That's right, O Gentle Reader: we're about to get lit-critical all up in here.

I may come to pass that I'll wind up confirming every annoying stereotype and so-called principle that the OSR stands for. Then again, maybe I'll discover something truly new and change my own perspective on gaming. Who knows? But it's sure to be an adventure, of a sort, all on its own.

At any rate, I think it's a worthy endeavor, and it's something that I've been meaning to get around to for a very long time indeed.

II. Starting with Chainmail — and Laying Down Da Roolz

So we'll begin at the beginning and take a look at Chainmail, the 1971 medieval miniatures war-game by Gary Gygax and Jeff Perren. While it's not technically a part of the D&D rules system, it is the immediate forerunner of the 1974 rules, and for that reason alone it's worth taking a quick peek.

But first, some ground rules.

Firstly, I'm not here to nitpick differences between different printings of the same title. Different versions or editions of the D&D rules? Sure, that's fair game. But I don't particularly give a shit that Chainmail's first printing said "hobbits," while the later printings said "halflings."  Everybody already knows that story; there's nothing new or interesting to say about it.

Secondly, I'm going to restrict myself (at least for now) to the D&D game, as published by TSR from 1974 through 1996. I'm going to avoid analyzing books from other systems, including AD&D, until I've gone though everything that I care to regarding the D&D game. That means that I'll be proceeding chronologically from the 70s booklets through the 80s boxed sets and modules, and then into the 90s sets and Challenger Series.

Thirdly, I am mostly interested in getting to that 90s D&D stuff as quickly as possible, because nobody has really paid it any attention at all. So expect my analyses to start brief and to grow more detailed over time, as I approach my target era. 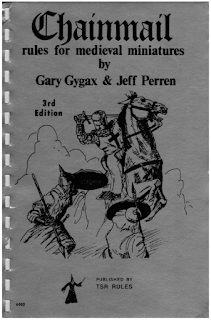 Since I've had to spend so much time during this first essay just trying to explain what I intend to do, I think I'm justified in avoiding a "deep dive" here—and again, Chainmail is connected to D&D without really being a part of it. There's only so much to interest us here.

Reading through the rules (specifically Chainmail 3rd edition, with the Fantasy Supplement), we get a picture of some very dedicated hobbyists who were all about getting creative with both the game rules and the props and pieces they used to play. Early on, the rules exhort the reader to follow their "spirit" rather than their "letter," since not every situation can be adjudicated by the rules given in the booklet; but also, once a ruling has been made, to keep it in a notebook and apply it consistently from then on. So we have an early indication not of rulings replacing rules—but rulings becoming rules for the group that makes them. I suspect that this is going to be an oft-repeated theme from here on out.

I was also struck by a note in the fantasy supplement, that keeping track of the heights of flying creatures on a tabletop with mere notes can be very difficult, and they suggest getting around this by mounting vertical 36" dowel rods on index-card-sized wooden bases (2" × 4"), and then affixing any flying units to the rods at the appropriate scale height with rubber bands!  That is both an awesome solution to the flying monster/wizard positioning problem, something I would love to implement if I had the space in my home for a dedicating gaming table and miniatures; and also something terribly impractical for the DM-on-the-go who likes a small, sleek kit of gaming gear for running at friendly local game shops. In short, it makes me sad that I can't quite do that (yet).

We have the early appearance of alignment in Chainmail, where "Law" and "Chaos" are pretty much just names that the game gives to "the side of good" and "the side of evil"—so that if you were going to, say, recreate a battle from The Lord of the Rings with the Chainmail rules, the Law faction would amount to the Free Peoples, and Chaos to the Enemy. Except, elves are noted as Neutral between the factions, but with a tendency to join Law. There's really no indication one way or the other whether Gygax &al. are trying to portray elves in accordance with Tolkien—good guys, but reluctant to get involved—or to distance their own portrayal from Tolkien and suggest a more folkloric and hostile breed of elf. But I tend to suspect the former, because everything else about Chianmail's fantasy supplement positively screams "recreating battles in Middle-Earth" and not so much anything pertaining to edgy modern interpretations of Celtic or Norse mythology. After all, this long predates a time when elves are the bad guys could be shocking—the stereotype of gentle hippie elves hadn't even materialized yet, and could not have done so before D&D!

Let's take a closer look at the actual rules of play.

One thing that jumps out pretty early to an OD&D player is that Chainmail operates according to a combat sequence that has pretty clearly influenced the way combat wound up working all the way down through the Rules Cyclopedia and the tan box, with movement and then missile-fire and then mêlées resolved last. It's a little more complicated, with various phases were missile-fire can be resolved between other parts of the sequence, but totally appropriate to this sort of war-game.

The table of spells available Wizard-type figures is always fascinating, every time I look at it. There's no hint of the Vancian casting system here: instead, Wizards (optionally) cast spells by rolling against their "complexity." The effects of the spells on the tabletop are analogous to things like catapults, and of course this is also a clear influence on why certain spells wound up working the way that they did (having such ranges, areas, and damage ratings) later on in D&D and AD&D.

The combat system (man-to-man and fantastical combat) is on the opaque side and not particularly interesting to a D&D player who's never used anything but the standard D&D combat system. I think I'd like to give it a try someday, but it would involve parsing everything in this booklet and actually coming to understand how it really works—I'm a little busy for that now.

The most interesting small details to me, I think, are the monsters, and the way they've been grouped together. Ogres and trolls (what the text calls "true trolls" to refer to the Poul Anderson variety that became standard in D&D) are basically the same, except that the true trolls are stronger (they attack as giants) and harder to kill because of their regeneration. Dragons are an absolute terror on the battlefield and rightfully given the same point value as a full-blown Wizard. Wights and ghouls are equated—they're treated as the same sort of figure, with zombies getting an off-hand mention as the lesser version of these.

Basically, the upshot here is that D&D's characteristic monster menagerie wasn't quite wholly formed yet, but it was certainly taking shape here.

All in all, it's a cool little system, and I'd love to try playing straight-up Chainmail myself someday. (The problem is finding fellow gamers equally interested in a war-game like this.) I have a certain degree of fondness for the idea of a skirmish game without too much affectation or embellishment (cf. Retro Phaze), and Chainmail would certainly be a bare bones version of that sort of game. It's just a little difficult for someone with modern sensibilities to get into, and if a simpler version of the game existed (and I don't think WotC's version of Chainmail from 2002, nor its immediate descendant D&D Miniatures, really qualifies), I'd very much like to try that out too.

Next time I feel like writing one of these posts, I'll peer into the first of the actual D&D rulebooks: Men & Magic.
Posted by John Higgins at 6:35 PM