As the end of July approaches, my Barrowmaze campaign's mid-game looms ahead.  Most of the long-running player characters in the game are solidly 5th level, with one of the longest pushing 6th and a couple of sporadic players and/or demi-human characters lagging back at 3rd or 4th.  Two new players joined the game about three weeks back and rolled up a 1st level fighter and mage respectively, and the mage has already made 2nd level.  The fighter might have as well, except that we had to end this past Saturday's game in the dungeon—not the Barrowmaze, mind, but the Caverns of Thracia.

I'll get to that in a moment.  First, a quick update on the party roster.  Here it is in full, starting with the eldest players.

We have my old group from last year, with my neighbor running two characters and the other three players running one (surviving character) each:

Then we have the players who joined a short while after the game began but who have largely suck with it since, including my brother (who runs Bog Bo the swamp orc almost exclusively and has only played his other character, Barton the gnome, precisely once) and my wife (who plays Sorcha the druid).  There's also this guy, who drops in from time to time to play Baltar the bard (yo).  Naturally, Darmok and Jalad are two characters both belonging to yet another player, and I must say I appreciate the fellow Trekkie.

Finally, our two newest regulars, who stand here at the moment with one character each as they learn the ropes:

Players drop in and out, it's very West Marches when some few or most of them show up to play each weekend (also pretty cool if I do say so myself, as it lends variety to the proceedings).

So, anyway… prior to this most recent game, the party had delved the Barrowmaze each time, either focusing on exploring mounds or going into the crypt complex underneath them.  (So far, I believe the players have discovered no fewer than three entrances down into the dungeons; but they haven't quite explored enough to confirm whether they've found three discreet crypt complexes or whether the tombs they've been raiding are in fact connected.  Each entrance has been the impetus to a single delve-and-search, after which the players go back to exploring the mounds on the surface.)

Two weeks back, the players became trapped in a crypt behind a self-locking door and decided to sleep in the Barrowmaze dungeon itself before attempting to break free.  This drew the attention of a shuffling horde of ravenous zombies collecting outside the crypt, scratching at the door through the night, occasionally trying to batter it down, keeping the characters who stood watch in a state of ever-growing tension as morning drew near.  Then, at last, as rested as they could hope to be, the party's fighters battered the door open, spotted the zombie horde, and a desperate fight for survival ensued.  A well-placed lightning bolt and some rotting body parts taken from a ghoul and cleverly tossed to the zombies (courtesy of the new mage player) saved the day, and so the party escaped with their lives and they learned a lesson: don't sleep in dungeons.

Or, at least, don't sleep in the Barrowmaze.  As of this last week, it's clear that they didn't take any kind of broadly applicable lesson to heart.

This past Saturday, only four players showed up.  With a group this small, even with NPCs along, they didn't want to risk the Maze.  So they decided to follow up on rumors floating around the local villages.  What's going on with the dwarves of the Moon Peaks, or the lizardmen of the moors?  Thinking to involve themselves in both mysteries with a little expedition through the swamp and then into the mountains, they struck out into the south part of the Barrowmoors, where—"x" marks the spot, 0608 on the map—the lizardmen have their temple in the swamp: 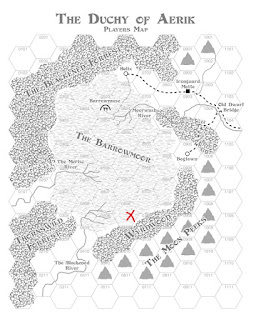 And what lies underneath that temple, you might ask?  Why, the classic 1979 Judge's Guild dungeon by Jennell Jaquays, The Caverns of Thracia.  I've always wanted to run this dungeon, and I put it on the Barrowmoor map because it just fits really well thematically: lizardfolk living in a ruin on the edge of a swampy forest (check), a temple to an ancient death-god (check—the caverns are a temple to Thanatos, which in the Mystara setting I'm using to run the game is in fact one of the Immortals, the Grim Reaper himself, the very concept of death given form, and the oldest of all the death gods; since Barrowmaze deals with rival death gods Orcus and Set vying for the power of their fallen father Nergal, it was a simple matter to tweak the story and imply that deep in the mists of history, once upon a time, Nergal successfully pulled off just this sort of coup against brother Zargon and father Thanatos to become the head honcho of the underworld in a creepy bad guy take on the whole Uranus–Chronus–Zeus thing), old-school mega-dungeon full of lethal traps and rival factions and no-punches-pulled scary monsters and utter weirdness (check). 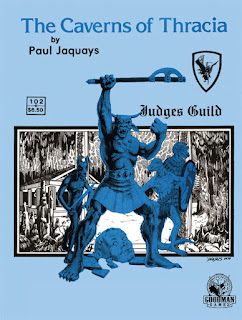 So the players actually managed to talk their way past the lizardfolk (mostly via chutzpah and dumb luck), find the stairs down to the first dungeon level, and start exploring the place.  They raided a shrine, looted some crypts, got into a nasty fight with an oracular demonic skull that flies around and spits magic missiles, and finally they came to a great, big natural underground cavern that more or less halted their progress and prompted them to remain in the dungeon at game's end.  They already slew a gelatinous cube in the bottom of the gorge before setting up camp; now it remains to be seen what they'll encounter in the night when next we meet again.
Posted by John Higgins at 9:02 AM