Last Christmas, I treated myself to a copy of Barrowmaze Complete.  Along with it, I managed to rekindle my interest in running D&D, reassemble the larger part of my old gaming group, and resuming gaming after a hiatus of several months! 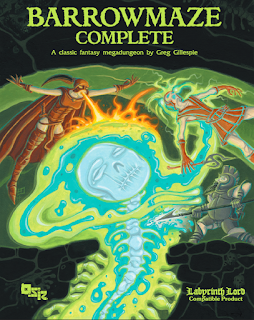 Barrowmaze Complete is really quite a beautiful book.  The orange spine immediately evokes memories of the later-period AD&D 1st edition books (Unearthed Arcana, the core books with the Easley covers, and so forth).

And tonally, Barrowmaze is very AD&D in style, funky Erol Otus cover notwithstanding.  The region (the Duchy of Aerik), the villages of Helix and Bogtown, and the dungeon itself are all just dripping with Gygaxian flavor.  Bogtown, especially, is so reminiscent of Nulb that you half expect to see priests of Elemental Evil traipsing through the streets.  It's all very gritty and low-fantasy, very swords-and-sorcery.

In fact, Barrowmaze draws quite a bit on AD&D and even (to a certain extent) expects DMs to use it with Labyrinth Lord and the Advanced Edition Companion.  The campaign includes advanced spells, items, and monsters; and more than a few NPCs are multi-classed or dual-classed or have a sub-class like paladin or ranger.  I worried, at first, that there would be a certain tonal mismatch between Barrowmaze (and its very Gygaxian implied setting) and the straight-up basic D&D that I intended to run.

In fact, I wanted this campaign to feel so very D&D that for the first time, I've set one of my games in the heart of Mystara—in the Grand Duchy of Karameikos.

But as it turns out, it works.  Or at least, it's worked well so far.  And to give the player characters an easier starting location than the setting of Barrowmaze, the Duchy of Aerik (which, to fit it into Karameikos, had to be downgraded to the "Barony" of Aerik—there are only baronies within the Grand Duchy), I imported some more stuff from AD&D.  Specifically, I took the Silver Vale from the AD&D 2nd edition fast-play and introductory sets.  You know, these guys: 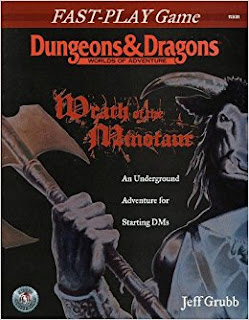 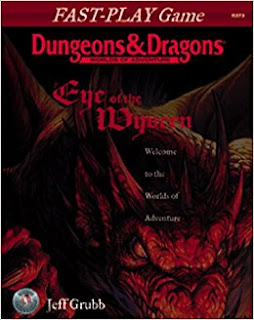 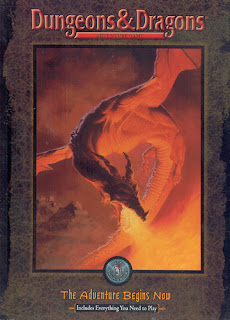 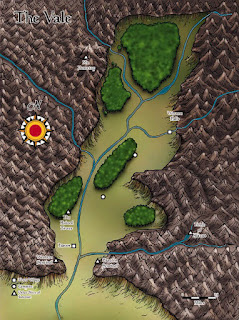 I'd played these back in the day when they first came out in the late 90s.  They were very similar in feel to the Thunder Rift stuff from several years earlier, but probably even more simple and straightforward.  Anyway, I felt that these little adventures and their setting would make a good starting point for the campaign.

And what are the odds, anyway, that TSR would have put out a mini setting around a "Silver Vale" with a capital called "Haven," that ultimately had nothing to do with module B3, Palace of the Silver Princess?  Anyway, I decided to stick this Vale on the map of Karameikos precisely where the green-cover B3 would normally be set (I always preferred the orange-cover version set in Glantri anyhow).  Then I took the newly-downgraded "Barony of Aerik" and set it just to the southwest of Haven, so that the Barrowmoor would roughly coincide with the Kelvin Moor of Karameikos, like so: 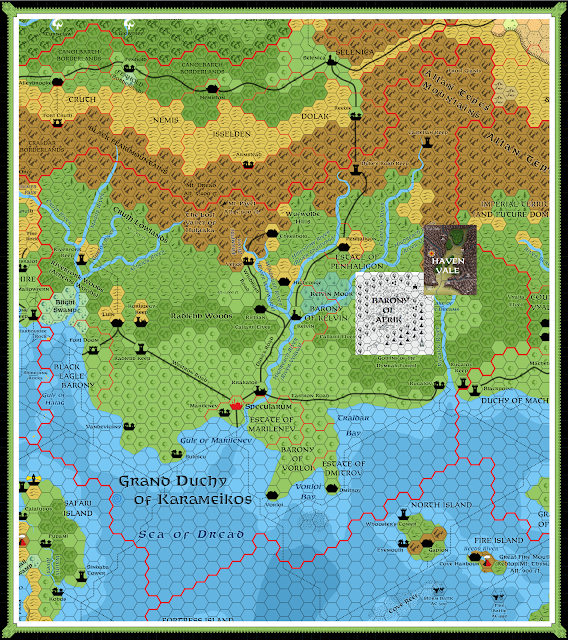 And apart from that, I all I needed to do to get this campaign off the ground was to add some extra mini-dungeons for the characters to explore, to keep things from getting boring.  So here's what I threw onto the map:
• If you look back up at the map of the Vale, you'll see two dungeon locations along the east leg of the mountains, the "Tomb of Alaxus" from Wrath of the Minotaur and "Wyvern Falls" from Eye of the Wyvern.  I set the Tomb of the Iron God in the former location (I just made it so that the Tomb of Alaxus became its upper levels, and the titular Iron God was represented to his followers as an iron minotaur—it worked); and I set the Tomb of the Serpent Kings behind Wyvern Falls and made it into a lost temple of the snake god Set (one of the villains of Barrowmaze).
• Within the Barony of Aerik itself, I put The Sunless Citadel just outside the village of Helix, The Forge of Fury down in the Moon Peaks south of where the dwarves live (again re-fluffled into a lost temple of one of of the setting's evil gods), and the Caverns of Thracia on the southeastern edge of the swamp, in lizardman territory (precisely where that module wants its dungeon set—on the edge of a swamp, occupied by lizardmen—it fits really well).
• At the crossroads between the Vale and the barony, I dropped none other than the Shady Dragon Inn (AC1), slightly tweaked so that the Inn of Lost Heroes adventure could be run there if the inn should ever happen to be destroyed in a fire (and since a red dragon lives on Mt. Dometop in the Vale, that turned out to be a pretty good bet).
• Finally, if the players should happen to wander far north of the lands of Aerik and follow the road up to Castellan Keep, they won't find the Caves of Chaos nearby—they'll find Stonehell Dungeon there instead.  But that's more of a "just in case the players go there" sort of thing, not something I actually expect to see come up in the game.

So over the course of the last several months, the players have indeed explored the Silver Vale, thoroughly looted the tombs therein, explored the Sunken Citadel, delved into the Barrowmaze a few times, and this last session they finally assaulted Mt. Dometop and slew Moltenclaw.  (All of the references to worshiping the great red dragon Ashardalon in The Sunless Citadel of course came to refer to Moltenclaw for the sake of this campaign, who in those old 2e adventures happens to have fanatical goblinoid worshipers at his beck and call.  Again, this all fits together entirely too well.)  The confrontation was brought about when the dragon swept out of the Vale and burned up their favorite Inn at the crossroads, which was thereafter haunted (see Inn of Lost Heroes) until the PCs did something about that too.

And, just to tie things to the broader setting, the proprietors of that inn were retired adventures, whose former companions were a magic-user named Bargle who now lives out west in the Black Eagle Barony, and a burglar whose daughter, Aleena, became a priestess that now dwells in Helix and has since inherited the inn that the PCs just rebuilt…