No time to write, so have a picture of dice

First week of the semester is over and I'm already swamped.  I wanted to finish writing up that series of campaign creation posts from November.  I wanted to start reviewing 90s "Challenger Series" D&D products.  (Still do.)  I have a half-finished review of Barrowmaze that I started on the day it came in the mail—I need to find the time to finish that.  But I'm also in two masters-level English classes and General Relativity right now; I've got applications to PhD programs going out, I have to take a couple of GREs, one of them very soon; and I have a comprehensive exam coming up that I have to pass to finish my MA.  (Oy vey.)

And on top of that, my gaming group is back together and I'm running Barrowmaze for them using the Rules Cyclopedia and GAZ1: The Grand Duchy of Karameikos.  It's a full plate!

So anyway—when I get the time, I'll talk at length about Barrowmaze and about the campaign that I'm running with it, and how I've fit everything together (it does work when set in Mystara!), but in the meanwhile, I've also decided to try and run this campaign with the minimum possible amount of "kit" to schlep between home and the game-shop.  I'm still on that minimalism kick apparently: I have the two hardcover books, my DM screen, a folder with the character sheets and other papers, a small pencil-case, and these dice: 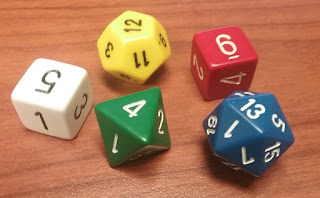 I can't recall the last time I tried to run D&D with so few dice, but something about it feels primal.  Like I'm recapturing the days when polyhedral dice weren't plentiful and we gamers didn't all have tackle-boxes overflowing with the damned things.  Just a close approximation of the five dice that would have come in the Basic Set box (but I find a second d6 to be more useful than a d4: it actually rolls; it's not as dangerous an implement; a DM has to roll 2d6 all the time for reactions, morale, and initiative; and a d4 is effortlessly emulated by halving a d8 roll).

Ordinarily, I'd have a large Crown Royal bag filled with many d6s and d8s, a couple of d2s, d3s, d4s, d5s, d10s, d12s, d16s, at least 3d20, and a percentile die, a d24, and a d30.  All carefully selected so that no two dice of the same type are ever the same color.  And… well, that's kind of a pain to manage.  And I also want to try and get away from fetishizing (as we gamers so often do) what are really nothing more than some simple random-number-generators.

I've found that the five dice shown in the picture above are all I really need to referee a campaign with all due efficiency and simplicity; and so I'm going to try and carry through a whole campaign this way.  We'll see how it goes.
Posted by John Higgins at 11:40 AM 2 comments: