When it comes to ability scores in D&D, there are two main tensions at work:

• How do you balance the fun of random scores against the disparity between players who roll well vs. those who roll poorly?
• And, intimately related to this, how much should a good roll or a bad roll impact the character?  In other words, how you balance "scores should matter" vs. "scores shouldn't matter that much"?

The first question speaks directly to ability score generation.  What's preferred?  What's ideal?  3d6 in order ("Ironman")?  4d6k3 ("Gygaxian")?  Soulless point-buy systems?  Group dice (i.e. roll 18d6 to the table and let all the players use this same roll to build their own set of six 3d6 rolls)?  Each has their pros and cons, but a quick run-down of the old-school orthodoxy goes something like this:

Dungeon Cross-Sections (and the clever use of isometry)

So, now that The Shade Isle Campaign has wrapped up, I don't have any qualms about putting up a cross-section for the campaign dungeon, Shade Abbey.  Thus: 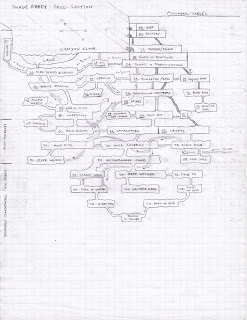 But the cross-section doesn't really do this dungeon justice, because the dungeon-levels are not simply laid out east to west; some sub-levels are actually "behind" or "in front" of other levels, in the ±z axial direction if you will (north and south, or in and out of the plane of the page).

So, how to remedy this issue?  Why, isometric graphing paper, of course.  (If any of my current players stumble upon this blog post, kindly avoid reading below the fold while The Heathlands Campaign is still going on.) :-)

I Love that New Campaign Smell…

…Mmm, smells like fresh mountain pine and the blood of conquered enemies being driven before me.

So, The Shade Isle Campaign ended pretty suddenly, the players more or less unanimously agreeing to epilogue all of their characters' story arcs and retire them right then and there.  I think we were spurred along by the fact that two other players, curious about old-school D&D, were looking to join a game, and so there was little reason not to get a new one off the ground as soon as possible.

The new game is known as The Heathlands Campaign, and I think that instead of trying to "storytime" my game sessions, I'm instead going to attempt to chronicle the act of building a mostly empty and indistinctly formed world up around the game as it progresses.  Since I didn't actually expect to be running the new campaign this week, I just busted out the starting adventure I had ready (Shadows of the Halfling Hall for C&C, if you're curious) and dropped the characters into it with the bare-minimum context—"You all belong to a snobbish gentleman's adventuring organization called the Manticore Club, and as part of your rookie hazing, they've sent you out to this backwater dwarf-village to find some valuable relics—now get to it! …Oh, and by the way, watch out—zombies!"

My next campaign will K.I.S.S.

It looks as though, at long last, The Shade Isle Campaign (v3.0) is winding down.

The player characters are all 10th level, pushing 11th.  As soon as Deliah (the party sorceress) learned the teleport spell, she used her crystal ball to start scrying distant campaign-villain Prince Svartsen of Dolheim so that she could execute a good ol'fashioned scry-'port-gank.

They've destroyed all of the eyes of Izatu-Bal and used the empowered fiend-bane blade Fyndattr to shatter the Ruby Wall in the Temple of Evil Chaos (in a certain borderlandsy keep-like thing that tends to have such things).  They've brought peace and prosperity to the towns of Sægan, Dwerport, Dämmendell, and Rorgan, and become elf-friends to the Grugach tribe of the Dimmenwald (where Connor now resides as Arch-Druid).

They've slain Anarxis the dragon, who turned out to be the Frankenstein-esque creation of a sad, mad alchemist, one Massimo Grigio, who was pining for the hand of the dwarf-queen Zirabeel of Ezulor and needed a means of eliminating all her other suitors and admirers.  A plan which backfired spectacularly, of course, since it led to the death of the queen and the fall of the dwarf-kingdom a century back.  But with Anarxis dead and his treasure-hoard claimed, the dwarves are now restored to Ezulor, and their kingdom of old will grow strong again.

Most of Shade Isle is downright civilized now.