Update on my playing card design

So this is a fun little bit of arts & crafts.

For a long time, I've wanted to be able to design my own playing cards from scratch, but drawing every pip by hand is extremely tedious.  I did it once; never again.  The natural solution would be instead to use rubber stamps and permanent ink.  But, even after having looked everywhere, I could never find a set of rubber stamps in the shape of the common card-suits.

So, this past weekend, since I had some extra time on my hands, I just went, "fuck it, let's do this"—and I set about teaching myself how to carve stamps.  I got some carving-rubber, some gouging-tools, and some wood blocks and super-glue for mounting-handles.  And this was the result: 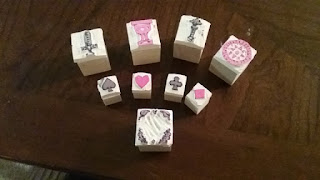 I carved out a spade, heart, club, and diamond in the size of ordinary card pips (about a half inch wide and two-thirds inches tall), plus a 1.5-inch "wreath" design to stamp around the lone pips on each ace.

Then, instead of face designs for the court-cards, I decided to carve out some 1.5" "extra large" suit pips in each of the old Spanish/Italian/Tarot suits—swords, cups, staves, and coins.  The idea would be to treat each large pip as a "ten", and then put extra, ordinary pips on the court cards to indicate their actual rank/value: one extra pip on the jacks, two pips on the thanes, three on the queens, and four on the kings.  This has the added benefit of marking each court-card with its point value in pips when playing the game of tarot—for example, the queen (being the thirteenth card in rank) has one big pip and three little pips, and in tarot it's worth three points (if you count tricks as 1 point each) or four points (if you don't count tricks, but count the scoring-cards off in batches).

The end result looks pretty groovy and has lots of character: 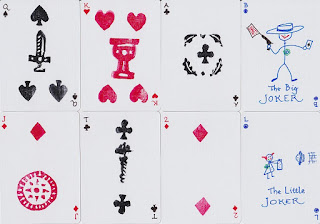 Oh, yeah, and I also scribbled out some cute cartoony jokers to go with the pack, in the same style as the stick-figure tarot trumps I posted about earlier.  The big joker is based on you-know-who, while the little joker is based on Binky the Clown's silent little assistant/foil from Garfield and Friends.