I think it would be prudent now to start with an updated party roster, especially since the Nameless Warrior finally has a proper name: Klaus Bleowulf (the surname meaning "blue wolf" in the Old English, and also a cute pun on Beowulf; as an amateur Anglo-Saxonist, I approve wholeheartedly).  Now that the party has six regular player characters, that's a six-plus-way division of the experience points each game: everybody earned a little over 600 XP at the end of last session, and maybe 650 XP apiece at the end of this session.  And this is with a party of six PCs (four 3rd level and two 4th level), one 2nd level retainer, two hired men-at-arms, and one or two charmed followers, basically steamrolling their way through most of the dungeon's first-level sub-sections.

Read more »
Posted by John Higgins at 6:38 PM No comments:

That kind of tears it: it's been a long time since I've been excited enough about a campaign to try and figure out how to use that hot mess of a website.

Anyway, now that I intend to start writing regular session reports, expect them to go up both here and there.  Jeez, and I also have to invite my players and start filling in the campaign wiki... gah, this is complicated.

Posted by John Higgins at 5:48 AM No comments:

...and this should bring us up to date.

While the player characters were traipsing through the Lornword, on one occasion they had a random "encounter" with an enormous black dragon.  I put the word "encounter" in scare-quotes, because it was honestly more of a scare than an encounter.  Upon spying the dragon, the characters either froze or hid, hoping to go unnoticed.  The dragon circled their position a few times and then left, flying back off to the north, having either failed to spot them through the forest canopy or chosen to ignore them.  Thus did the party have its first run-in with Shade Isle's chief calamity and terror, Anarxis of the North.

Read more »
Posted by John Higgins at 5:58 PM No comments:

So the next several sessions consisted largely of expeditions out of Sægen Village to explore the Old Fortress, eight leagues east of the village along the southern coast of the isle.  The fortress, they discovered, was not so much a building as a complex of tunnels delved into the cliff-slide, with a narrow path carved into the face of the rock leading down to a good-sized ledge outside the entrance.  It was there that the party discovered the black-cloaked men who'd passed through the village two weeks prior: they had set up some kind of excavation site just outside the entrance, with pits and scaffolding and piles of supplies and digging tools.

Read more »
Posted by John Higgins at 9:22 AM No comments:

By my estimation, there have been roughly a dozen game sessions now since I started my current D&D campaign.  The map from the previous post depicts those areas on Shade Isle where the player characters have traveled, except for the detached region on the left of the map which isn't connected to the bigger part---that's a section of the map that was penciled in based on a treasure-map purchased from a peddler of questionable honesty.  But more on that in a moment.  First, here's the skinny:

Four months into the campaign, here's how much hex the party has crawled 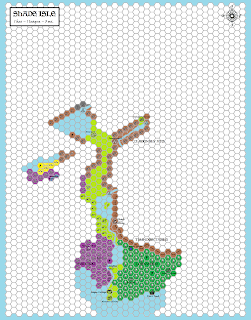 Not bad at all, in my estimation.  Especially given how dangerous Shade Isle's wilderness encounters can be once you stray more than a couple days north of Sægen Village.
Posted by John Higgins at 5:22 PM No comments:

I need to get back in the habit...

...of writing regularly.  Mostly, I want to start blogging in earnest about my current D&D campaign.

Actually, this is probably a good time to start, since this last Sunday's session was the first we've played with a properly full table.  It's been only two or three players each game until now, when we suddenly have half a dozen.


Posted by John Higgins at 4:51 PM No comments: